Formerly dominated by underutilized properties and an abandoned freeway, the Transit Center District is now the site of a comprehensive planning and redevelopment effort to create a dense, walkable employment center that will feature housing at all levels of affordability, active retail and abundant public open space. The substantial public infrastructure investment needed to undertake this project is funded through a complex and innovative mix of public and private funding sources. The major rezoning of properties throughout the district, along with its significant amenities, has created substantial value while generating enthusiastic response among the development community. 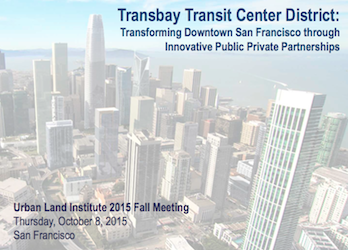 A concurrent session at the recent ULI Fall Meeting, "Transbay Transit Center District: Transforming Downtown San Francisco through Innovative Public/Private Partnerships" examines the redevelopment challenges overcome during the project and strategies used to create this new “Grand Central of the West” and its adjacent neighborhood.

Discussion leaders included Scott Boule of Transbay Joint Powers Authority, Tiffany Bohee of the San Francisco Office of Community Investment and Infrastructure, John Eudy of Essex Property Trust, Mike Grisso of Kilroy Realty Corporation and John Rahaim of the City of San Francisco. Libby Seifel served as moderator of the panel, in addition to her duties as local program co-chair of the ULI Fall Meeting.

A video of the session is available for viewing at ULI's webpage, here. Part of an educational forum coordinate by the California Department of Transportation (CDOT), the presentation describes the density thresholds and development characteristics necessary to support key amenities and frequent transit service, as well as the critical role affordable housing plays in supporting these objectives.

Planning Horizons is an educational forum coordinated by the CDOT Workforce Development Branch, with speakers selected from both within Caltrans and the greater planning community. More information is on the program is available here.

San Francisco: one of the hottest housing markets in the nation, where housing demand has surged along with job growth (about 30,000 new jobs since 2012), largely fueled by the rapid rise in “knowledge sharing” companies, like Salesforce, Twitter, AirBnB and LinkedIn. While 2014 was a banner year for housing construction in San Francisco (2,500+ housing units underway), the dramatic decline in construction during the recession means housing supply has not kept pace with demand. 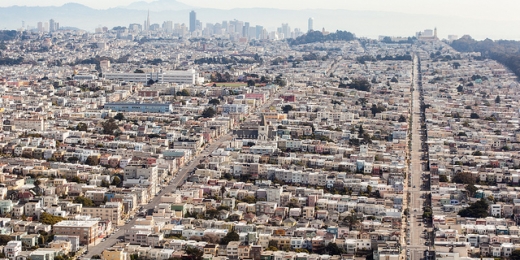 There are only 2.1 months of remaining inventory for condominiums—one of the lowest inventory levels since 2008, says Chris Foley of Polaris. Chris presented an overview of the San Francisco housing market at the recent SPUR panel, “Housing Forecast: 2015” presented in conjunction with the San Francisco Housing Action Coalition (SF HAC) and the San Francisco AIA. Chris estimates that San Francisco currently has a shortfall in housing supply of 15,175 housing units.

The Office of Economic and Workforce Development’s (OEWD’s) Sarah Dennis-Phillips presented that San Francisco’s population is projected to grow by about 250,000 people over the next 25 years. To help meet future housing demand, the Mayor of San Francisco has established a goal to produce 30,000 units by 2020, of which 30% would be permanently affordable and 50% would be within the financial reach of working, middle income families. The City has established a housing meter that counts housing projects as they are completed, helping San Francisco to track its progress.

Libby Seifel presented an overview of Seifel’s recent work for the Mayor’s Office of Housing and Community Development (MOHCD) to evaluate the “State of the Housing Market” in San Francisco. Seifel recently updated its 2012 Briefing Book, which profiles the City’s demographic and housing market trends, with a special focus on evaluating how recent changes in the housing market affect underserved low, moderate and middle income households. In addition, Libby described Seifel’s recent work with David Baker Architects to evaluate how density bonuses might be used

Tim Colen of SF HAC served as panel moderator, and Meg Spriggs of Shorenstein provided insights about how developers are viewing today’s and tomorrow’s San Francisco housing market. As presented in the panel, many local developers are now looking at development opportunities in Oakland and Emeryville, where a recent surge in home prices and rents has enhanced the financial feasibility of new development.

The discussion ended with the conclusion that San Francisco needs to pursue a broad variety of strategies to increase the pace of development, as well as pursue new funding sources to help assure that the majority of new housing is affordable to the City’s diverse population.

The MIT Center for Real Estate (MITCRE) hosted its Alumni West Coast Back-to-School day in January 2015. Held at the Pier 1 headquarters of Prologis (in their graciously-donated meeting space), the event gave attendees the opportunity to hear from current MIT faculty on latest research and to hear from alumni and industry leaders on the important work they are stewarding. Patrick Kennedy ’85 of Panoramic Interests and Professor Albert Saiz, Director at MITCRE, opened the event. 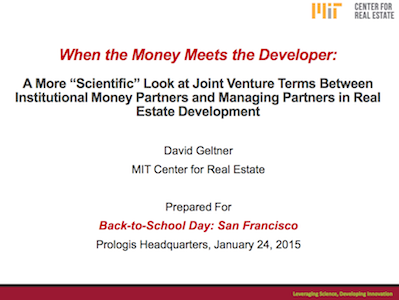 In her presentation “IT Infrastructure & Asset Value Premia”, Dr. Andrea Chegut, Research Associate at MITCRE, explored the developing role of IT infrastructure in commercial development and how developers are rethinking the technology footprint of their projects. 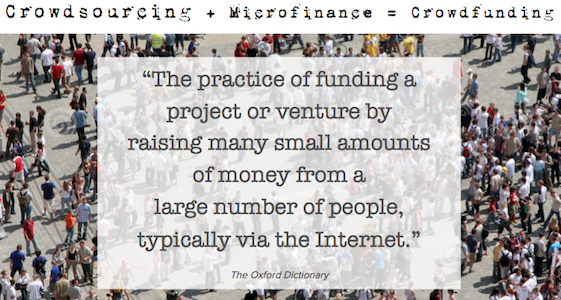 “Crowdfunding for Real Estate Equity”, whose panelists included Bonnie Burgett of Sourced Capital, Adam Hooper of Real Crowd, Rodrigo Nino of Prodigy Network and Tom Lockhard of Fundrise looked at the emergence of crowdfunding as a powerful tool in the promotion and financing of healthy development.

Founded in 1983 by an MIT alum Charles “Hank” Spaulding (CE ’51), MITCRE provides tomorrow’s real estate practitioners with a foundation to help traverse and transform a complex and global real estate market. More about the program can be found here.

Etsy: A Global Marketplace for Artisans

Etsy, the online global marketplace for artists, artisans and collectors, is transforming how people around the world connect to buy and sell unique goods. Etsy currently boasts over 40 million members and is active in 200 countries with annual transactions.

Etsy’s mission is to re-imagine commerce in ways that build a more fulfilling and lasting world. Etsy practices its mission in all it does and in its work environment. Etsy is headquartered in Brooklyn, in the affectionately-named neighborhood of “DUMBO” (short for “down under the Manhattan Bridge overpass”). The company lives its mission, as ULI members saw firsthand during a recent tour of Etsy headquarters at the finish of the ULI Fall Meeting & Urban Land Expo (held this year in New York City).

Etsy is increasingly promoting and training local manufacturers and artisans across the country to sell their goods on line. SFMade, one of Etsy’s key local partners, boasts a similar mission in building and supporting a vibrant manufacturing sector in San Francisco. Former Seifel staff member, Abbie Wertheim, is working with Etsy to coordinate national efforts to support manufacturing with the Urban Manufacturing Alliance.

Our mission is to re-imagine commerce in ways that build a more fulfilling and lasting world. - Etsy