The economic challenges to building a strong regional economy is compounded by the reality that middle-income jobs in the Bay Area are becoming scarcer as more and more job growth takes place at the high and low ends of the wage spectrum. SPUR is collaborating with a group of partners to help expand economic opportunities for low- and moderate-income Bay Area residents through its work on the Economic Prosperity Strategy, a key initiative of One Bay Area.

For the 2013 Index of Silicon Valley, SPUR wrote a special analysis on the economic benefits of governing the Bay Area as if it were a single economic region. The analysis focused on issues are difficult to address at the local level (limited housing production, fragmented transit delivery systems, job sprawl, fiscal inequities and climate change) and recommended potential strategies to address them. As the Bay Area economy began to improve, SPUR reported in its publication The Urban Future of Work that knowledge sector firms are embracing the benefits of urbanism and relocating to San Francisco and other transit accessible Bay Area cities because these companies recognize the locational advantages of being close to suppliers, collaborators, and urban amenities desired by their employees.

SPUR’s Regional Policy Board advises on SPUR’s regional planning endeavors and Libby Seifel chairs this Board for SPUR.

How do you make the urban core a more vibrant place to live, work, and play? Members of the Urban Revitalization Council of the Urban Land Institute (ULI) discussed ways to catalyze investment and development in the urban core, the demographic factors that influence the popularity of urban living, and how different sectors of the real estate market are currently thriving in the urban core. Featured alongside fellow urbanists James Moore, Janet Protas, Claudia Sieb, and Charles Werhane, Libby Seifel provided insight into using a combination of public and private resources to bring an area back from deterioration. 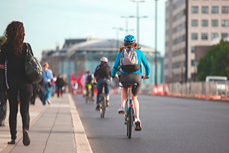 “The last mile from transit is critical," Libby says."People want pedestrian- and bike-friendly paths between housing and the transit stop. Urban core areas that are able to achieve this will be extremely successful.”

Silicon Valley, the heart of California’s technology hub, is perceived as a desirable place to live and work. However, many of the workers who keep Silicon Valley’s economic engine moving forward are unable to afford homes in the very communities in which they work. NPH and Urban Habitat recently published Moving Silicon Valley Forward – Housing, Transit and Traffic at a Crossroad, a report that explores the economic, housing, and transportation challenges in Silicon Valley.

Moving Silicon Valley Forward shows that “contrary to popular perception, the average commuter into Silicon Valley is not the highly paid technology worker. More than 45 percent of in-commuters into San Mateo County earn less than $40,000 per year.”

In response to record growth in San Francisco’s downtown in the mid-1980s, San Francisco created the Transfer of Development Rights (TDR) program to preserve the City’s “unique historic, architectural and aesthetic character.” The TDR program allows property owners to transfer unused development potential from a preservation property to other properties to ultimately be used on a development property in order to increase allowable gross floor area above what would otherwise be allowed. For the past three decades, the TDR program has helped the City to accommodate growth downtown while providing owners of historic buildings with incentives to maintain cultural resources.

The San Francisco Planning Department retained the Seifel Consulting team to conduct a comprehensive review of the City’s existing TDR program and make recommendations about how best to implement it in the future, including whether to certify TDR on City owned public buildings. Seifel was asked to analyze the impact of the potential sale of TDR from public properties on the TDR market.

The Seifel team completed a comprehensive review of the City’s existing TDR program and policies, and conducted in-depth analysis on the Planning Department’s database used to track TDR certification, transfer and use. It assessed the historical pace of TDR activity, key market factors in TDR transactions, and the value of TDR to the real estate development community. To provide insight into program implementation, as well the TDR market and pricing, the team interviewed brokers and other stakeholders involved in the TDR market and prepared case studies on specific TDR transactions in San Francisco. Finally, the team researched historic preservation-related TDR programs in other cities.

Click here for a copy of the Seifel team's TDR Study, included in the July 2013 San Francisco Planning staff report.

The Future of Funding for Transit Oriented Development and Affordable Housing

While transit-oriented development (TOD) projects are being encouraged throughout the nation, limited financial resources are available to catalyze their development. The Transit-Oriented Affordable Housing Fund (TOAH Fund) is an innovative $50 million public-private financing resource that provides up-front funding to catalyze the development of affordable housing, valuable community services, and other neighborhood assets near transit lines throughout the San Francisco Bay Area.

The TOAH Fund was created by a collaboration of the Metropolitan Transportation Commission (MTC), its partner regional planning agency (ABAG), and a dedicated core of nonprofit organizations. MTC has been at the forefront of promoting TOD in the Bay Area, and it provided the initial $10 million in seed capital that serves as the first of five components in the capital stack. According to a Fund Sponsor, “Convening a diversity of players in the affordable housing community and having partners with a high level of trust, competency and a shared understanding of goals and the need to distribute investments regionally was critical in the Fund’s formation.” To date, the Fund has awarded financing to four projects: Eddy and Taylor Family Housing (San Francisco), 5th and Howard (San Francisco), Leigh Avenue Senior Apartments (San Jose), and West Grand Development (Oakland).

The TOAH Fund, with LISC, retained Seifel and ICF International to provide program evaluation and implementation consulting services for the TOAH Fund. Their analysis is available here.

More on the TOAH fund and its mission can be found here.